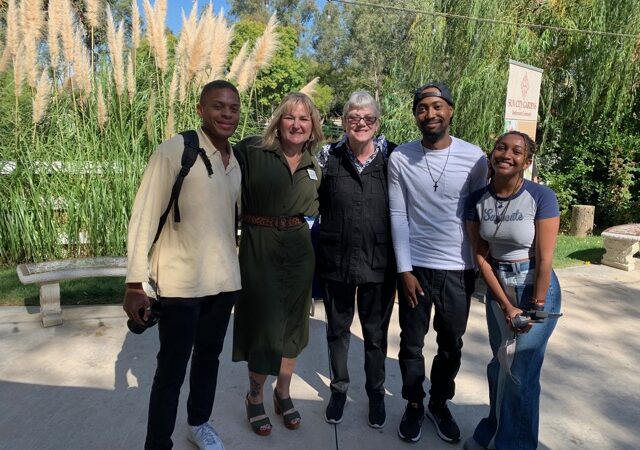 It has been 2 years since we filmed in person interviews. On October 22, 2021, we filmed our first in person interviews at the Veterans Expo in Murrieta with UC Riverside Veterans Resource Center Fall 2021 VHVtv Student Interns Jaspreet Kaur, Cameron Lewis, Isabelle Cherubin and Lawrence Ball. Thank You UCR VRC Coordinator Tami Thacker. In early 2020, VHVtv co-producer Sandy Dee and Sheryl Shaffer had 4 production meetings at the University of California Riverside Veterans Resource Center to create a half hour VHVtv episode about the VRC. During these meetings, we were introduced to Richard Gonzales, a work study student who agreed to help us film on campus in mid-March 2020. The Covid 19 Pandemic started early 2020 and by mid-March the campus had been shut down. During this time, I had my first video conference call and realized I could use that platform to create VHVtv virtual interviews. I contacted Richard and asked if he would help me do this and he agreed and he edits using Premiere Pro.
VHVtv continues our collaboration with the VRC as we refresh Veterans Helping Veterans TV and are learning as we go.

VHVtv continues our collaboration with the Veterans Resource Center at UC Riverside. This interview is about Tami Thacker, the Manager of the VRC.
VHVtv is creating content with UCR VRC Interns. Jaspreet Kaur, a UCR VRC VHVtv Intern interviews Tami. Filmed in San Diego on Sunday December 5, 2021.
This is the first video I have created with my new iPhone 13 Pro and I edited it using iMovie. So excited for a brand new beginning in 2022!

The second VHVtv video filmed at this event is created by VHVtv producer Sandy Dee.
Here is her interview with Michael Carrillo of the Navy Federal Credit Union.

Here is our third video. It was great to film on location at the Veterans Expo 2021 in Murrieta.

Our third video is with Major Kristian Ticas of the Civil Air Patrol, Squadron 59 Ryan-Hemet.

This interview is with Maurice Garcia and Veterans Helping Veterans at UC Riverside.
This VHVtv content is created with UC Riverside and the Veterans Resource Center.
Thank you to our VHVtv – UCR VRC student interns, Cameron Lewis, Isabelle Cherubin and Lawrence Ball. Filmed in person at the Veterans Expo 2021 in Murrieta, CA.